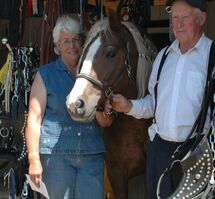 Timbertop Farm, Torbrook Nova Scotia, in the heart of the Annapolis Valley, is a beautiful rural area and where my husband Harry and I have raised cattle and horses for over 40 years. Haflingers became our passion during a trip to Fryeburg Maine, where 2 large barns displayed many pretty chestnuts with beautiful faces of expression, pleasant eye, sturdy build and personality plus.

Our Haflinger journey began quite unexpectedly in 1995, when we were offered a Temple Farm bred stallion, Adalbert along with his team mate, a gelding. At that time, Haflingers were virtually unheard of in Nova Scotia. That was about to change.  A trip to Ontario in 1996 resulted in our first sweet Haflinger mare, Maraleihn. Her foal, Maritime Mountain High was the 1st registered Haflinger born in Nova Scotia.
The rest, as they say, is history. We have bought, raised, sold and enjoyed many. Our remaining herd of 14 are “living the life”.
My love of horses began at a very early age, riding English, Western and helping my children with their horses.  Since the Haflingers came into our lives, my interest has turned to showing our horses in harness at the local fairs and exhibitions.
There have been many Haflinger journeys, including two trips to the amazing Fohlenhof Ebbs in Austria, where you can watch hundreds of the best of the breed being judged and performing in every possible discipline. Many of our trips have been to the US for AHR sales, meetings and breeding farms.  I have been fortunate to have met many wonderful people and made many lasting friendships.

We are founding members of the Nova Scotia Haflinger Club which was established on February 18, 2001. During the past 18 years, we have been totally involved in promoting the breed through demonstrations, breed expos, shows, clinics, parades and any other opportunity to show or talk about our horses.

I was asked to join the CHA board of directors 5 years ago and am very positive about the direction and steps that the board has taken to place the CHA and the breed in line with the World Haflinger Breeding and Sports Federation and the American Haflinger Association. I am pleased to have the opportunity to continue to promote the Haflinger breed and work for the members of the Canadian Haflinger Association.