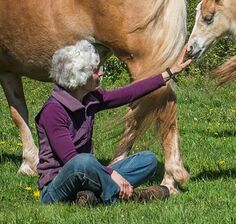 Gillian Allan -  CHA's President
Gillian Allan is passionate about Haflingers. She is an active member of the Nova Scotia Haflinger Club, having sat on the board for a number of years and stood as president for the past three years. She has been a member of the Canadian Haflinger Association and has been part of the board since 2014. Gillian and her husband manage the Wallace River Haflinger stud with Nick-MJ and his small herd of mares.
Gillian participates in as many clinics and lessons as possible in both riding and driving and she has trained her Haflingers for all types of riding and driving activities including Ultimate Trail, Pleasure Driving shows, Combined Driving Events and pleasure trail riding. She completed her drive coaching requirements and is now an NCCP certified drive coach which is recognized by Equestrian Canada and Nova Scotia Equestrian Federation.
As a retired teacher and educator, Gillian values lifelong learning.She has conducted numerous driving clinics and hosted international clinicians at the farm. It was her involvement and commitment to the Haflinger breed that was a deciding factor when she received the 2018 Volunteer of the Year Award from NSEF.
​
Gillian has accepted the positon as President for the Canadian Haflinger Association Board.